The Energy Hub system is demonstrated in the district of Tweewaters in Leuven, Belgium. At the heart of the energy supply is a biomass fired cogeneration unit, which provides 80% of the heat and 100% of the electricity for the district in a fourth generation district heating network. A new type of business model is applied, offering energy related and other services, called "MyJames".

Construction of Balk van Beel with its 106 dwellings and nine commercial units was completed in December 2013. The picture below shows an artist's impression and a recent picture of the Balk van Beel apartment building in the foreground and the silos in the background on top of which more apartments will be built at a later stage. 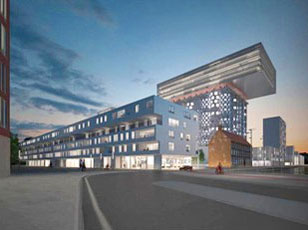 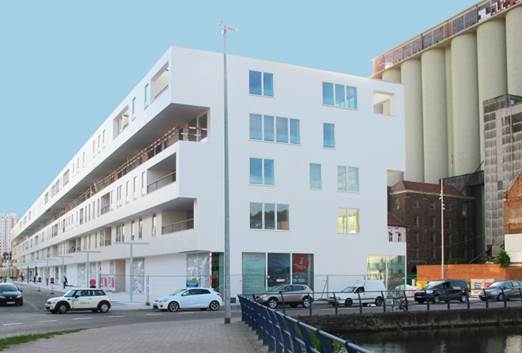 Artist's impression and picture of Balk van Beel with the silos in the background.

A MultiCommodity Gateway for the agent based control system was installed in each unit of the Balk van Beel. This control box collects the various data flows and forwards them to a (remote) central server that manages the interpretation and control of the energy flows. 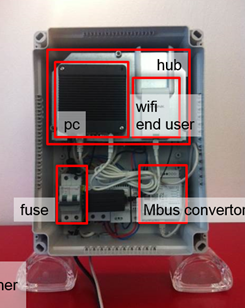 MultiCommodity Gateway installed in each unit of the Balk van Beel links with the central control system.

In 2014 the energy behaviour of Balk van Beel will be monitored live, thereby identifying technical and financial output for the Tweewaters business case. 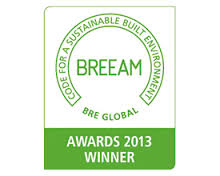 After being awarded the BREEAM 'Outstanding' certificate, the building received the 2013 BRE award. The Tweewaters quarter and its first phase, the Balk van Beel, received a nomination for the Global Cleantech Cluster Association (GCCA) Later Stage Award and the European Corporate Social Responsibility Award (CSR). Both the building and the quarter are also being used as a model project by Leuven Climate Neutral 2030 and the Flanders in Action (VIA) programme. Due to increasing interest in the project from the outside world, Ertzberg is able to widen the scope of its dissemination activities.

More information can be found at Tweewaters district.