A particularly promising technology using thermochemical materials (TCMs) is being studied by ECN.

At ECN, the initial material of choice was MgCl2-salt because of its high thermal capacity. A prototype consisting of 20 litres of fixed bed of MgCl2·6H2O was built and tested using moist air as the reacting medium and for heat transfer. However, detailed thermal analysis revealed a long term cyclic instability with for this salt.

It was therefore decided to continue the next phase with Zeolite, a substitiute active material. A 15 kWh heat storage system was designed, built and initial test were carried out. As before, the system is based on an open sorption concept to achieve a simple and low cost solution. The system contains two vessels of 112 dm³, each filled with 75 kg of zeolite grains. The storage capacity is approx. 15 kWh and thermal powers for charging and discharging are in the range of 0.5-1 kW. The system is shown in the pictures below. 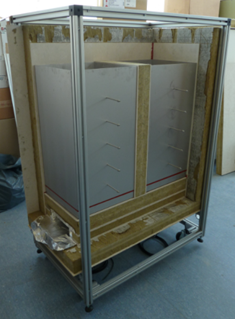 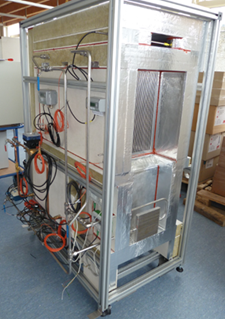 Open sorption storage vessels, and the air handling unit, both under construction.

The results of a charge-discharge cycle are summarized below. The temperature inside the zeolite reactor is measured at various heights. The graph below shows the graphs of the zeolite bed temperature over time. 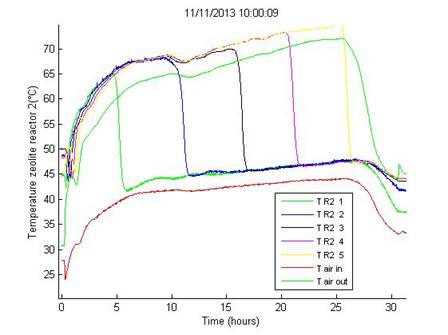 Measured temperature profiles in the zeolite reactor (TR1-TR5) and of the air inlet and outlet during charging (left) and discharging (right) of the system.

In discharge mode, cool and humidified air is blown through the dried zeolite and the water vapour is adsorbed. The heat of sorption is released and over time, the zeolite and the air increase in temperature to values of up to 70°C. After 25 hours of discharge the zeolite has reached its equilibrium sorption capacity and heat release stops rather abruptly. The steep drop in temperature through the bed again indicates a distinct reaction zone inside the bed that gradually shifts from bottom to top.

Another promising thermochemical storage technology is being studied by TNO.

Distributed heat storage is being studied by VITO.